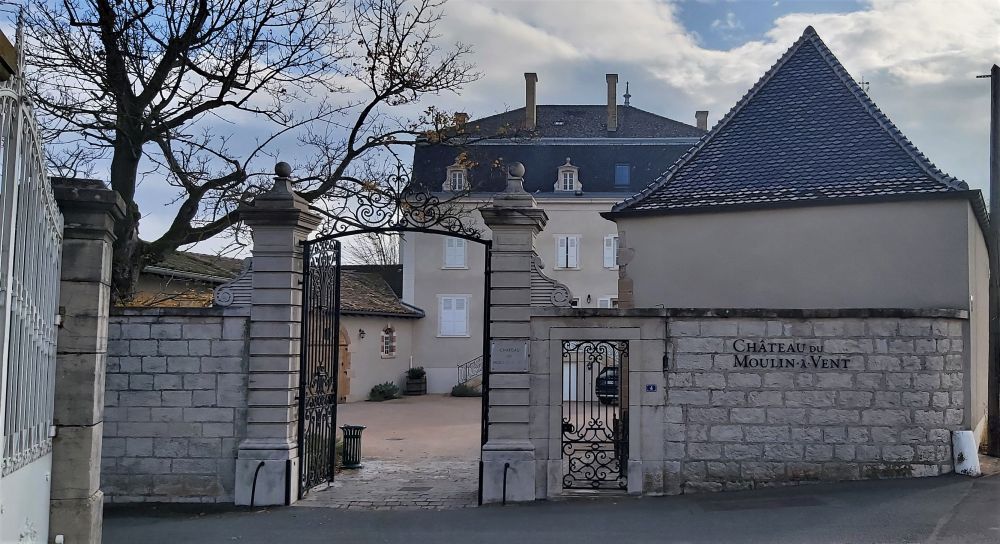 Despite all the prophecies of doom: Beaujolais lives - and how it is alive! Mon dieu!

It's rolling in again, the flood of all too cheap Beaujolais nouveau.... this is reason enough for me to once again take up the cudgels for this wonderful, unique wine region and its excellent wines. Last week I had the pleasure of visiting Château du Moulin à Vent and what better wines to show the potential of Gamay?
Here is a short portrait:
The AOP Moulin à Vent lies far to the north of Beaujolais and, as in neighbouring Burgundy, it was customary at the end of the 19th century to append the name of the best vineyard parcel to the commune name. Thus, the site "Thorins" has always been considered a Grand Cru and complemented the name of the commune Romanèche in Romanèche-Thorins, where the Château du Moulin à Vent winery is located today.
Viticulture can be traced back to 1732; the wine first really attracted attention for its excellence as early as 1802 and also met with great interest by renowned winemakers from Burgundy for its "elegance, fine bouquet and exceptional minerality".
The reputation of Beaujolais and especially of the Grand Cru sites rose sharply after the First World War: Prices on a par with the best sites of the Côte d'Or and equally comparable qualities attracted counterfeiters, which is why Moulin à Vent received the status of an "Appellation d'Origine" as early as 1924, a designation of origin that was transformed into an AOC in 1936.
Sometime during the 1960s/1970s, unfortunately, the reputation of Beaujolais changed; wrongly, I think, because the fantastic terroir is still there! Luckily, Jean-Jaques Parinet thought the same way and fulfilled his childhood dream in 2009 by buying Château du Moulin à Vent in Romanèche-Thorins. He still remembered very clearly the high quality of the wines from his youth and that is exactly where he wanted to take the domaine again. Supported by his son Edouard and cellar master Brice Laffon, some radical changes were made in the vineyard as well as in the cellar:
First, there was a rigorous switch to sustainable viticulture and about 70,000 vines were replanted to achieve a high vine density and thus force the vines to root deeply into the mineral-rich soil.

Granite is the predominant type of rock, sometimes pink, interspersed with silicate and also rich in iron oxide and manganese. At the higher altitudes, the constant wind causes erosion and one often finds the bare stone, hardly a crumb covers the rock, and the vines stand crouched in bush vineyards. The grapes are harvested manually after which they ferment gently in steel tanks for about 20 days. A very small amount of wood (25%) is used for ageing, as they want to show the unique character of the wines. On the 30ha estate, 120 different parcels have been designated, all of which bring their own distinctive characteristics. Some are blended into the classic "Château du Moulin à Vent", while others are so outstanding that they are bottled as single vineyards, such as the Clos de Londres directly behind the estate itself, Champ du Cour, Vérillats or La Rochelle. 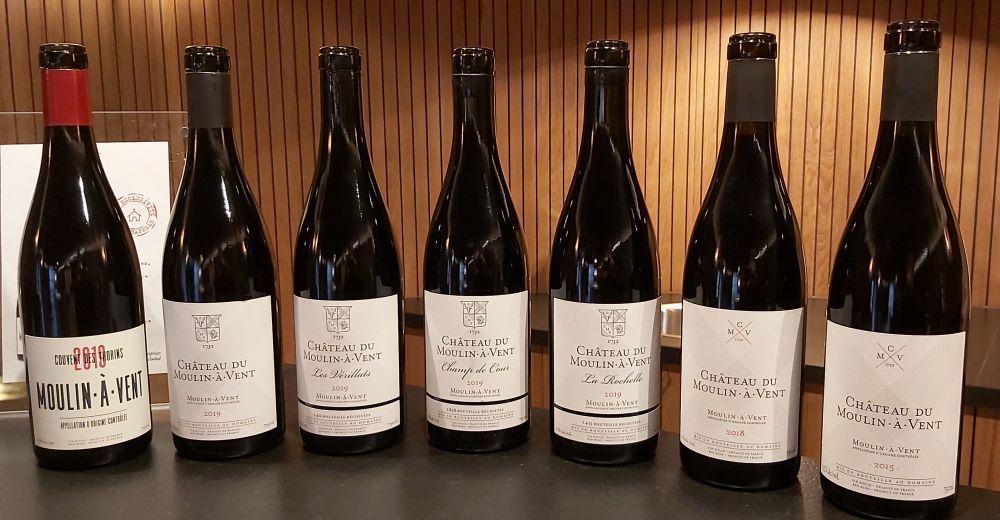 In the Clos de Londres you find vines over 70 years old, crumbly red granite interspersed with some clay and you get powerful, spicy wines with notes of dark pepper and a robust power reminiscent of Pommard.
The Champ de Cour is sheltered from the wind at a similar altitude of around 180m and you will find alluvial soils mixed with some clay. Lush, dense, seductive with touches of violets and black wild berries, this is a velvety, dense version of Gamay.
Les Vèrillats, like La Rochelle, is located high up on the slope (about 400m) and sits fully in a wind corridor, resulting in small berries. A concentrated, red, fresh fruit shows with notes of raspberries, ripe sour cherries, lavender and fresh sage; lively, fine-nerved, yet with silky-soft tannins.
La Rochelle turns a little to the north and the soil is quite poor, characterised by silicate. This minerality shines through with tremendous tension in the wine and underpins the slightly tart, yet very delicate aromas of rosehip, cranberry, pomegranate and pink pepper. Complex and multi-layered like all single-vineyard wines and with a very good longevity potential.
The Château du Moulin à Vent is an assemblage from several different plots and represents the house style; the individual terroirs are recognisable, one can taste very well that some grapes originate from heavier soils, others rather from higher altitudes. A superb cuvée with notes of red cherry, sloes, some wet earth, stone and grippy, yet velvety tannins. Even in the older vintages I tasted, it still has an animating acidity that makes you want to drink the next bottle.
With this in mind, take a trip to Beaujolais, taste your way through the region, because there are some great wineries to discover (e.g. Clotaire Michal, Les Terres Dorrées, Thivin and many more).
Drink more Beaujolais and - with the words of Edouard Parinet: "Stay Gamayzing!

You're welcome to contact me on further enquiries via mail at info@helgaschroeder.com, via phone on +49 171 8661160 or via the contact form below: